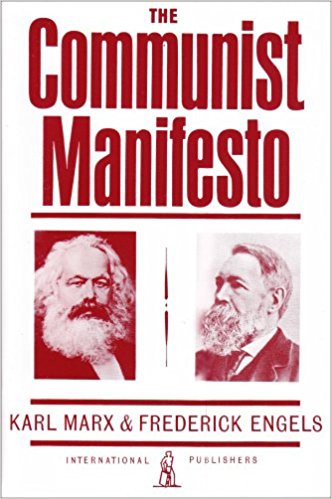 In 2012, Seth recommended "The Communist Manifesto" by Karl Marx and said...

This book isn't about what you think it's about. And it's certainly not about the USSR. The key argument here is that small experiments in communism don't work, because they are corrupted by the temptation to defect and engage in trade with neighbors that exploit their workers (so you can benefit). Only worldwide revolution and grabbed power by farmers and factory workers can upend the unfair bargain that kings and capitalists have put in place. At one profound level they are right: as long as the workers don't own the means of production, the exchange will be inherently unfair. A lot of what they pessimistically predicted has occurred to the workers at the bottom of the ladder.

What others thought about "The Communist Manifesto"

Altho both Engels & Marx are on the title page alongside the "persistent assumption of joint-authorship", Engels, in the preface to the 1883 German edition wrote it was "essentially Marx's work" & "the basic thought...belongs solely & exclusively to Marx." McLellan & other scholars believe "the actual drafting of The Communist Manifesto was done exclusively by Marx." The text itself claims to have been sketched by a group of Communists from various countries gathered in London.
The Manifesto's initial publication, in 1848 in London, was in German. The 1st English translation was produced by Helen MacFarlane in 1850. The Manifesto went thru a number of editions from 1872 to 1890. New prefaces were written by Marx & Engels for the 1872 German edition, the 1882 Russian edition, the 1883 German edition & the 1888 English edition. This edition, translated by Samuel Moore with Engels' assistance, has been the commonly used English text since.
Some recent English editions, such as Phil Gasper's annotated "road map" (Haymarket Books, '06), have used a slightly modified text in response to criticisms of the Moore translation made by Hal Draper in his The Adventures of the Communist Manifesto (Center for Socialist History, '94).
The Manifesto is divided into an introduction, three substantive sections & a conclusion.
The introduction begins with the comparison of communism to a spectre, claiming that across Europe communism is feared, but not understood. Thus communists ought to make their views known with a manifesto:
"A spectre is haunting Europe—the spectre of Communism. All the Powers of old Europe have entered into a holy alliance to exorcise this spectre: Pope & Czar, Metternich & Guizot, French Radicals & German police-spies. Where is the party in opposition that has not been decried as Communistic by its opponents in power? Where is the Opposition that has not hurled back the branding reproach of Communism, against the more advanced opposition parties, as well as against its reactionary adversaries?"