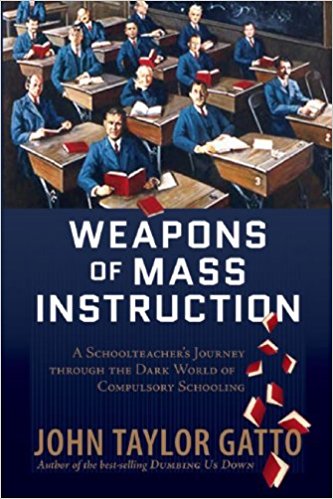 In 2011, Seth recommended "Weapons of Mass Instruction" by John Taylor Gatto and said...

I end up recommending this book to parents again and again. It will transform the way you think of schooling.

Seth also recommended the book again in 2012 and said:

John Taylor Gatto is spitting mad, and no wonder. He has seen the worst our schools can do. He understands the history and is a victim of the bureaucracy. I wish every school board member, administrator, teacher, and parent could read a ten-page excerpt of this book. It's important.

What others thought about "Weapons of Mass Instruction"

John Taylor Gatto’s Weapons of Mass Instruction, now available in paperback, focuses on mechanisms of traditional education that cripple imagination, discourage critical thinking, and create a false view of learning as a byproduct of rote-memorization drills. Gatto’s earlier book, Dumbing Us Down, introduced the now-famous expression of the title into the common vernacular. Weapons of Mass Instruction adds another chilling metaphor to the brief against conventional schooling.

Gatto demonstrates that the harm school inflicts is rational and deliberate. The real function of pedagogy, he argues, is to render the common population manageable. To that end, young people must be conditioned to rely upon experts, to remain divided from natural alliances, and to accept disconnections from their own lived experiences. They must at all costs be discouraged from developing self-reliance and independence.

Escaping this trap requires strategy Gatto calls “open source learning” which imposes no artificial divisions between learning and life. Through this alternative approach, our children can avoid being indoctrinated—only then that can they achieve self-knowledge, judgment, and courage.

John Taylor Gatto is an internationally renowned speaker who lectures widely on school reform. He taught for thirty years in public schools before resigning on the op-ed pages of The Wall Street Journal during the year he was named New York’s official “Teacher of the Year.” On April 3, 2008, the Kennedy School of Government at Harvard credited Gatto with adding the expression “dumbing us down” to the school debate worldwide.