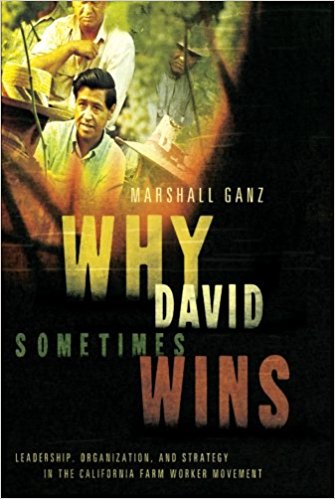 In 2016, Seth recommended "Why David Sometimes Wins" by Marshall Ganz and said...

What others thought about "Why David Sometimes Wins"

Why David Sometimes Wins tells the story of Cesar Chavez and the United Farm Workers' groundbreaking victory, drawing important lessons from this dramatic tale. Since the 1900s, large-scale agricultural enterprises relied on migrant labor--a cheap, unorganized, and powerless workforce. In 1965, when some 800 Filipino grape workers began to strike under the aegis of the AFL-CIO, the UFW soon joined the action with 2,000 Mexican workers and turned the strike into a civil rights struggle. They engaged in civil disobedience, mobilized support from churches and students, boycotted growers, and transformed their struggle into La Causa, a farm workers' movement that eventually triumphed over the grape industry's Goliath. Why did they succeed? How can the powerless challenge the powerful successfully?

Offering insight from a longtime movement organizer and scholar, Ganz illustrates how they had the ability and resourcefulness to devise good strategy and turn short-term advantages into long-term gains. Authoritative in scholarship and magisterial in scope, this book constitutes a seminal contribution to learning from the movement's struggles, set-backs, and successes.