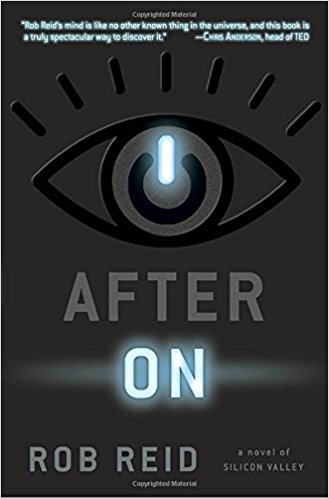 What others thought about "After On"

The definitive novel of today’s Silicon Valley, After On flash-captures our cultural and technological moment with up-to-the-instant savvy. Matters of privacy and government intrusion, post-Tinder romance, nihilistic terrorism, artificial consciousness, synthetic biology, and much more are tackled with authority and brash playfulness by New York Times bestselling author Rob Reid.

Meet Phluttr—a diabolically addictive new social network and a villainess, heroine, enemy, and/or bestie to millions. Phluttr has ingested every fact and message ever sent to, from, and about her innumerable users. Her capabilities astound her makers—and they don’t even know the tenth of it.

But what’s the purpose of this stunning creation? Is it a front for something even darker and more powerful than the NSA? A bid to create a trillion-dollar market by becoming “The UberX of Sex”? Or a reckless experiment that could spawn the digital equivalent of a middle-school mean girl with enough charisma, dirt, and cunning to bend the entire planet to her will?

Phluttr has it in her to become the greatest gossip, flirt, or matchmaker in history. Or she could cure cancer, bring back Seinfeld, then start a nuclear war. Whatever she does, it’s not up to us. But a motley band of Silicon Valley entrepreneurs, venture capitalists, and engineers might be able to influence her.

After On achieves the literary singularity—fusing speculative satire and astonishing reality into a sharp-witted, ferociously believable, IMAX-wide view of our digital age.