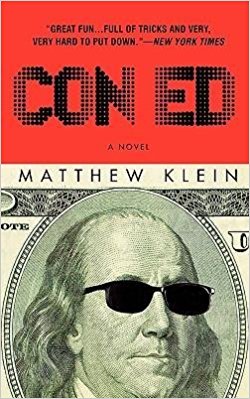 Unputdownable. And they'll even teach you a little bit about how people market to themselves.

What others thought about "Con Ed"

Kip Largo was once the world's greatest con man. Then he got busted. And spent eight years in jail. And lost his family. And lost everything except his crummy apartment and sense of humor. Now he spends his days working at a third-rate dry cleaner and maintaining a fourth-rate website. But hey, it's an honest living.

Then one day he meets Lauren Napier, beautiful wife of billionaire Ed Napier. Lauren's got a problem. She wants to leave Ed, but doesn't get squat in a divorce. She wants Kip to steal the money. She wants to pay him handsomely for his services. Kip's many things, but dumb isn't one of them. He knows that when a beautiful woman wants something from you, the only thing you're gonna get in return is trouble. So he makes the smart choice and walks away. But then things get complicated.

Kip comes home one day to find his son on his couch. Kip hasn't seen his son in years. Guess what' His son owes money to the Russian Mob. Kip can't say he saw that coming. And his son is short, well, the whole amount. Kip's monthly gross from the website generally tops out at twelve bucks. And suddenly Lauren's proposal isn't looking half bad.

This is Kip's chance to start over, to save his son, to afford a brand new life. But Kips knows that in any heist things never go as planned, and if you don't improvise you'll be caught faster than a one-legged bank robber. But suddenly Kip doesn't know who's conning who'and if he doesn't figure it out, his life could be the ultimate failed con.