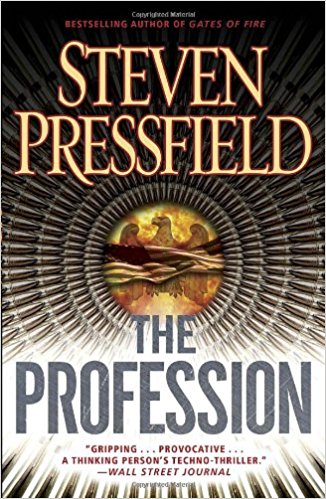 In 2011, Seth recommended "The Profession" by Steven Pressfield and said...

What others thought about "The Profession"

The “master storyteller” (Publishers Weekly) and bestselling author of Gates of Fire, The Afghan Campaign, and Killing Rommel returns with a stunning, chillingly plausible near-future thriller about the rise of a privately financed and global military industrial complex.

The year is 2032. The third Iran-Iraq war is over; the 11/11 dirty bomb attack on the port of Long Beach, California is receding into memory; Saudi Arabia has recently quelled a coup; Russians and Turks are clashing in the Caspian Basin; Iranian armored units, supported by the satellite and drone power of their Chinese allies, have emerged from their enclaves in Tehran and are sweeping south attempting to recapture the resource rich territory that had been stolen from them, in their view, by Lukoil, BP, and ExxonMobil and their privately-funded armies. Everywhere military force is for hire.  Oil companies, multi-national corporations and banks employ powerful, cutting-edge mercenary armies to control global chaos and protect their riches.  Even nation states enlist mercenary forces to suppress internal insurrections, hunt terrorists, and do the black bag jobs necessary to maintain the new New World Order.

Force Insertion is the world's merc monopoly. Its leader is the disgraced former United States Marine General James Salter, stripped of his command by the president for nuclear saber-rattling with the Chinese and banished to the Far East.  A grandmaster military and political strategist, Salter deftly seizes huge oil and gas fields, ultimately making himself the most powerful man in the world.  Salter's endgame is to take vengeance on those responsible for his exile and then come home...as Commander in Chief. The only man who can stop him is the novel's narrator, Gilbert "Gent" Gentilhomme, Salter's most loyal foot soldier and as close to him as the son Salter lost. As this action-jammed, lightning fast, and brutally realistic novel builds to its heart-stopping climax Gent launches his personally and professionally most desperate mission: to take out his mentor and save the United States from self destruction.