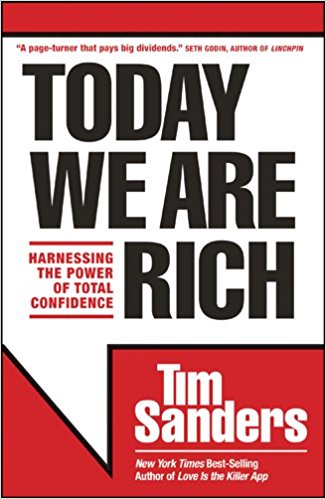 A personal, autobiographical look at the power of positive thought and generosity in business. Tim has lived it.

What others thought about "Today We Are Rich"

Are you just hanging in there? Have life's curveballs thrown you off balance? Do you feel as if your life is going sideways?

Bestselling author, leadership coach, and former Yahoo! executive Tim Sanders knows how you feel. His father's unexpected death put him in a downward spiral for fifteen years--what he calls his "sideways years." In 1996, a photo of a dusty water tower in Texas finally got his attention. That's when he realized he needed to go home to his rock--his grandmother Billye, who had taken him in when he was four and raised him as her own.

Rediscovering the lessons she had taught him as a child turned Tim's life around and, in less than four years, catapulted him to financial security and an officer-level role at an S&P 500 company at the center of the Internet revolution. Today, his promise to himself is "I will never forget those lessons. The price is too high." Join Tim as he rediscovers the classic principles of confident living that some of the most successful and joyful people you know live by.

Today We Are Rich Reviews