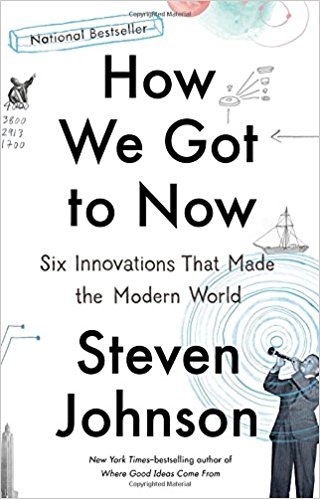 Steven Johnson's new book, How We Got to Now, is a perfect example. Beautifully written and professionally read, it will make you smarter, more curious and demands that you listen to it again.

What others thought about "How We Got to Now"

From the New York Times–bestselling author of Where Good Ideas Come From and Everything Bad Is Good for You, a new look at the power and legacy of great ideas.In this illustrated history, Steven Johnson explores the history of innovation over centuries, tracing facets of modern life (refrigeration, clocks, and eyeglass lenses, to name a few) from their creation by hobbyists, amateurs, and entrepreneurs to their unintended historical consequences. Filled with surprising stories of accidental genius and brilliant mistakes—from the French publisher who invented the phonograph before Edison but forgot to include playback, to the Hollywood movie star who helped invent the technology behind Wi-Fi and Bluetooth—How We Got to Now investigates the secret history behind the everyday objects of contemporary life.

In his trademark style, Johnson examines unexpected connections between seemingly unrelated fields: how the invention of air-conditioning enabled the largest migration of human beings in the history of the species—to cities such as Dubai or Phoenix, which would otherwise be virtually uninhabitable; how pendulum clocks helped trigger the industrial revolution; and how clean water made it possible to manufacture computer chips. Accompanied by a major six-part television series on PBS, How We Got to Now is the story of collaborative networks building the modern world, written in the provocative, informative, and engaging style that has earned Johnson fans around the globe.

How We Got to Now Reviews