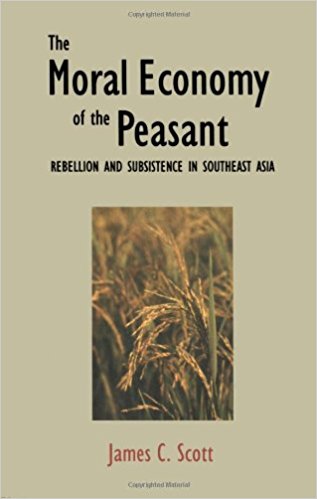 In 2003, Seth recommended "The Moral Economy of the Peasant" by James C. Scott and said...

This book outlines the reasons why many efforts to jumpstart third-world economies fail. It's not just peasants, though. Many of your prospects feel precisely the same way.

What others thought about "The Moral Economy of the Peasant"

James C. Scott places the critical problem of the peasant household—subsistence—at the center of this study. The fear of food shortages, he argues persuasively, explains many otherwise puzzling technical, social, and moral arrangements in peasant society, such as resistance to innovation, the desire to own land even at some cost in terms of income, relationships with other people, and relationships with institutions, including the state.

Once the centrality of the subsistence problem is recognized, its effects on notions of economic and political justice can also be seen. Scott draws from the history of agrarian society in lower Burma and Vietnam to show how the transformations of the colonial era systematically violated the peasants’ “moral economy” and created a situation of potential rebellion and revolution.

Demonstrating keen insights into the behavior of people in other cultures and a rare ability to generalize soundly from case studies, Scott offers a different perspective on peasant behavior that will be of interest particularly to political scientists, anthropologists, sociologists, and Southeast Asianists.

“The book is extraordinarily original and valuable and will have a very broad appeal. I think the central thesis is correct and compelling.”—Clifford Geertz

“In this major work, … Scott views peasants as political and moral actors defending their values as well as their individual security, making his book vital to an understanding of peasant politics.”—Library Journal

The Moral Economy of the Peasant Reviews