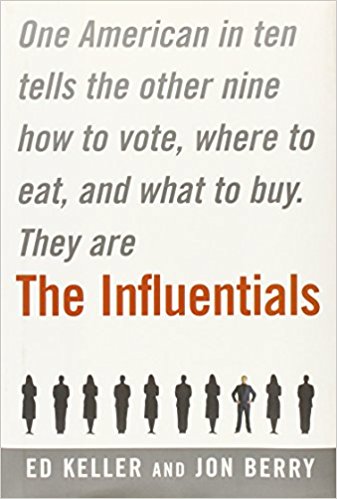 In 2003, Seth recommended "The Influentials" by Edward Keller and said...

This book exhaustively looks at one very influential group of early adopters. This may not be YOUR group, but the thinking applies to every hive I can think of.

What others thought about "The Influentials"

One American in ten tells the other nine how to vote, where to eat, and what to buy. They are
The Influentials
Who are they? The most influential Americans -- the ones who tell their neighbors what to buy, which politicians to support, and where to vacation -- are not necessarily the people you'd expect. They're not America's most affluent 10 percent or best-educated 10 percent. They're not the "early adopters," always the first to try everything from Franco-Polynesian fusion cooking to digital cameras. They are, however, the 10 percent of Americans most engaged in their local communities...and they wield a huge amount of influence within those communities. They're the campaigners for open-space initiatives. They're church vestrymen and friends of the local public library. They're the Influentials...and whether or not they are familiar to you, they're very well known to the researchers at RoperASW. For decades, these researchers have been on a quest for marketing's holy grail: that elusive but supremely powerful channel known as word of mouth. What they've learned is that even more important than the "word" -- what is said -- is the "mouth" -- who says it. They've identified, studied, and analyzed influence in America since the Standard Oil Company of New Jersey (now Exxon) hired Elmo Roper himself to develop a model for identifying opinion leaders, and in The Influentials, they are finally ready to share their results. A few samples:
• Influentials have been the "early majority" -- leading indicators of what Americans will be buying -- for more than five decades, from choosing energy-efficient cars in the 1970s to owning computers in the 1980s to adopting 401(k)s and IRAs in the 1990s to using the Internet and cell phones today.
• Influentials have led the way in social development as well, from the revival of self-reliance (in managing their own health care, investments, and consumption) to mass skepticism about the marketing claims of everything from breakfast food to politicians.
Although America's Influentials have always been powerful, they've never been more important than now. Today, a fragmented market has made it possible for Influentials to opt out of mass-message advertising, which means that a different route must be taken to capture their hearts and minds. The Influentials is a map for that route, a map that explains who these people are, how they exercise influence, and how they can be targeted. The Influentials features a series of rules and guidelines for marketing to Influentials; case studies of products that have prospered because of Influential marketing (and products that have failed because they lacked it); a history of the phenomenon...and why Influentials are more influential today than ever; and profiles of twelve real-life Influentials.
Both an intellectual adventure and a hands-on marketing manual, The Influentials is an extraordinary gold mine of information and analysis that no business can afford to ignore.